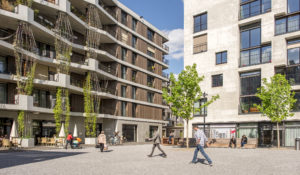 How will we live tomorrow? This question, which is essential to every housing project yet rarely addressed in practice, was posed at the beginning of a developmental process of several years that led to one of Europe’s most groundbreaking residential projects.

The history of More than Housing began in 2007, when the city of Zürich and its housing co-operatives celebrated the centenary of government support for co-operative housing construction using the slogan ‘100 years of more than housing’.  Within the framework of the festivities an international competition was organised calling for ideas regarding the future of non-profit residential construction that might help solve Zürich’s inner city housing crisis.

Completed at the end of 2015, More than Housing, is a co-operatively organised district section comprising 13 buildings, with 380 living units and space for 1,400 people located in Hunziker Areal in Leutschenbach, a district on the edge of Zürich.

The More than Housing project is an ultra-sustainable urban live/work space. The entire facility is based on the vision of the 2000-watt society, an environmental vision originally promoted by the Swiss Federal Institute of Technology. It seeks a reduction of individual energy use to a level that would be supported by the continuous running of a 2,000 watt generator. The scale and extent of this project makes it one of the largest and most ambitious cooperative housing programmes in Europe.

More than Housing won a World Habitat Award in 2016 and was a collaboration of over 50 co-operative organisations in Zurich.

Housing Europe: It’s all about people at ‘More than Housing’