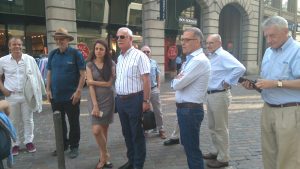 It was noted that a workshop to demonstrate the good governance test is planned for Antalya, and it’s hoped that this will also help promote its use more widely.

The President noted he would be creating an easier-to-approach version of the Blueprint over the summer to help organizations interpret the document for their members.

The President noted a review of the rules had been made primarily to remove the ability of members to have multiple votes, and limiting voting to one member, one vote. At the same time, a number of changes were made to change the name of the ICA and ICA Housing to The Alliance and Co-op Housing International throughout.

There was unanimous support by the directors for the change in the Rules to one member, one vote.

The President clarified that these revised rules would require recommendation to, and approval by, the CHI members at the plenary meeting in November 2015, and if receiving support, to the Alliance Board of Directors at its next meeting for approval.

Guido Schwarzendahl, and Nicholas Gazzard were appointed to serve as the nomination/election committee this year. A number of positions are to be filled (due to resignations and non-attendance, as noted earlier in the membership status report, in addition to terms expiring).

The election committee will hold a Skype meeting as soon as possible, to start planning for elections at the Antalya members meeting.

Vit Vanicek reported he was retiring from the board. Thanks were given to Vit for his many years’ service to CHI, on his retirement.

With Niall O’Keeffe’s resignation, the position of Vice-President has been left vacant. A new executive will be elected in Antalya in November. Until then, Guido Schwarzendahl agreed to serve as interim Vice-President.

Mehmet Aksoy, TURKKENT, Turkey
• Turkish government doesn’t support co-op housing
• some building going on (not the same issues around land availability in the Middle East as in Europe); some development of agricultural co-ops
• for the last 13 years, the government has been developing its own housing throughout the country; difficult for co-ops to compete with less expensive government housing

• co-ops are the only opportunity for low-income people to own their own homes
• Turkey receiving 3 million Syrian refugees; most living in camps though some have money to rent/buy; need to make sure refugees will be able to live in good conditions; some uncertainty about whether the refugees will stay in Turkey or not, so difficult to plan appropriate housing
• previously, the government was a partner with co-ops, but the current President is not; the President is putting up barriers to ministries working with co-ops and no idea whether this will change with a change in government.

Anders Lago, HSB Riksforbund, Sweden
• there continues to be a shortage of housing in Sweden for young people and young families
• refugee immigration will create an even great shortage of flats
• HSB is starting to build 2,500 units but at higher cost than previously (land in cities is not very available and what is, is expensive)
• HSB currently has about 27,000 rental apartments.

Vit Vanicek, Union of Czech and Moravian Housing Co-ops, Czech Republic
• the union has a stable membership of approximately 660 members representing 700,000 units (1/6 of units in the entire country are co-op)
• no government support of co-op housing; unable to construct new housing
• new government took office in the last year; a problem that with the adoptions of new laws, they don’t respect co-ops as a separate economic form.

Guido Schwarzendahl, GdW, Germany
• Germany is accepting refugees as well (100,000 last year); many of the current Syrian refugees are highly skilled and keen to integrate into their new home
• refugees going to cities where there is already a large population and housing shortages
• former GRD population isn’t used to living with migrants
• last five years in Berlin has seen a 45% increase in rents
• increasing construction costs, particularly with European environmental laws
• rent controls setting average rental charges; people not investing in housing more since the average rent doesn’t cover all the cost of new buildings.

Thor Eek, NBBL, Norway
• expecting 8,000 refugees over two years
• shortage of new dwellings, already high prices, and prices increasing because of shortages
• 80% of households in Norway own their own home
• continuing high cost of new buildings – regulations on environment, energy savings and accessibility increase costs; land cost are very high (not a lot of availability in cities)
• 3,000 new units being built this year.

Jane Cameron, CDS Co-operatives, UK
• new majority conservative government
• successful campaign prior to election which managed to get new housing builds onto the government’s radar
• “right to buy program” may be extended to social housing, including co-ops; hope to receive exception for co-ops again; legislation hasn’t been drafted yet
• Wales developing some 300-400 units of housing
• community land trusts in the UK – 170 now, and they are to provide 3,000 new homes by 2020 (of which hopefully some will be co-ops).

Nicholas Gazzard, CHF Canada, Canada
• concentration of population around large cities; shortage of available land in cities; poor transit systems
• 66% of Canadians own their own homes
• trying to get government to provide density variances (require building of some affordable units into new projects in exchange for higher density project)
• only some very small development of housing co-ops taking place. 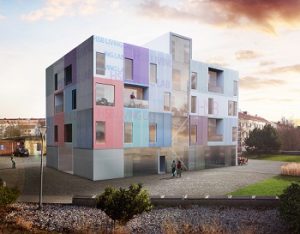 Anders Lago provided directors with a presentation on a model project (Living Lab) in Gothenburg, Sweden (which is a partnership between three organisations: HSB Housing Corporation, Johanneberg Science Park (JSP) and Chalmers University. ) in which 25 flats are being built. The HSB Living Lab aspires to use the results from research in the HSB production of homes, find solutions to challenges in society such as climate change and lack of homes, to increase partnership with companies, researchers and students and to find a model for temporary housing for young people and students. This Living Lab is also used for NASA in their work for sustainable habitats in space exploration.