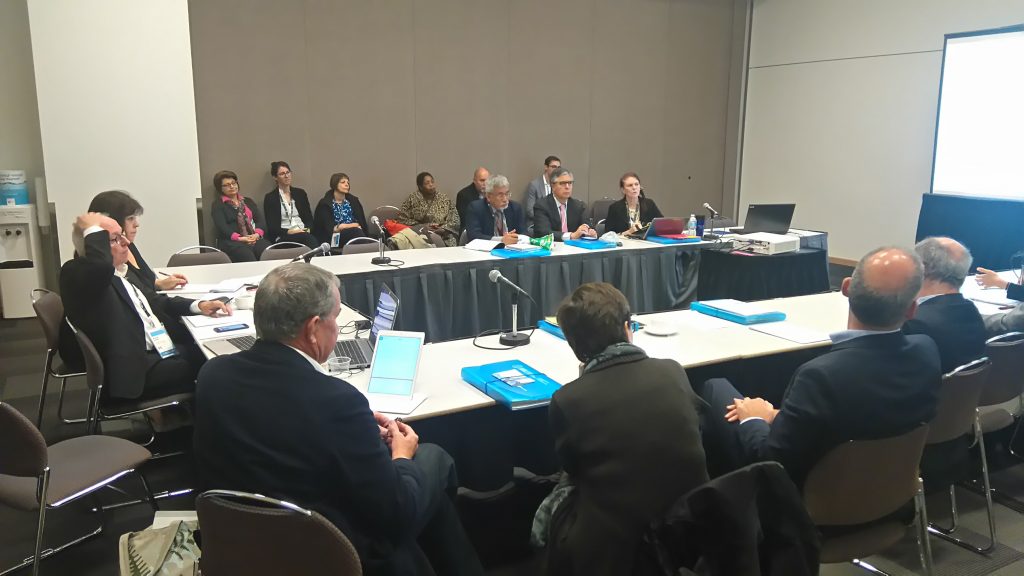 The President reported on a meeting with the representatives of the sector organizations and the Alliance Board of Directors in Stockholm building on an earlier meeting held in Brussels to discuss sectoral priorities and concerns. These concerns are primarily focused on the need for a better business cycle for sector organizations (providing them with approval in principle for workplans and budgets, before the new budget year has started).

Directors were in receipt of an oral report and presentation from the Vice-President covering his attendance at the two-day United Nations Economic Commission for Europe (UNECE) joint conference, held September 14-15 in Geneva, providing an overview of challenges facing the Ukrainian co-operative housing sector, particularly the government’s lack of a housing policy.

It was noted that co-op systems are seen as relics of the Communist era in the Ukraine. Many flats have been converted to condos or PLCs; no regulatory context is required for these forms of housing vs. housing co-operatives. He also noted that this isn’t only occurring in previously Soviet-bloc countries.

Others also noted:  In Estonia, help had previously been given to transform quasi-co-ops to true housing co-ops; however, all co-ops in Estonia have now been converted to other forms of tenure and housing co-ops have disappeared as a form of housing.

In Turkey, some housing units are being sold on a non-profit basis; but other housing is being sold by parties supported by government, on a for-profit basis.

In Chile, during the Pinochet era, housing co-ops had disappeared. But in the last ten years, co-ops are re-emerging with the support of public/private partnerships.

In Israel, the conservative government sees kibbutz and co-op movements as socialist/left-wing organizations. Co-operators met with the Ministry and government officials to persuade them that what is necessary is a plural economy — private, public and the co-op sectors all participating – to achieve not only economic, but social, outcomes. There is good policy and its good politics to support co-ops as can be demonstrated by the larger global co-op community.

Directors were reminded of the 17 sustainability goals that were supported by 190 world leaders in 2015. Countries are working towards the achievement of the sustainability goals by 2030. For CHI, the goals will serve as the lens through which the 2017 workplan will be reviewed.

Directors were in receipt of a written report indicating the status of each project/activity undertaken in 2016. It was noted that lots of work has been done to support the revamping of the CHI website, with the support and assistance of the CHI communications working group: Dermot Sellers (Co-operative Housing Ireland), Blase Lambert (CHI Board), Jane Cameron (CHI website co-ordinator), and Julie Lapalme (CHI program director).

It was noted that the new website will be made so that it can be viewed on various platforms (desktop, mobile, tablet). The program director will ensure instructions for users to translate the new website from English is made available on the main page.

Directors were in receipt of a written and oral report by the CHI Website Co-ordinator containing utilisation statistics for each of CHI’s social media sites and website.

Directors were in receipt of an oral report reporting on the continued involvement of CHI with the National Association of Housing Co-operatives (NAHC). The CHI president and program director will be attending the NAHC annual meeting in Las Vegas at the end of October, and will be speaking with NAHC representatives  then about the advantages of becoming a CHI member, under the auspices of the National Co-operative Business Association (NCBA), which is already a member of The Alliance. Linda Brockway reported that she was preparing a paper for the NAHC board of directors laying out the advantages and disadvantages of membership, for its information and discussion.

The CHI program director reported that, since the last board meeting, CHI has approved three new members (FUCVAM from Uruguay, Angkasa from Malaysia, and CUNABE from Chile), and that CHI now has a total of 23 members.

Guests also provided an update on their regions: