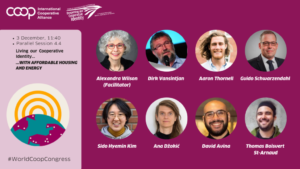 On the final day of the World Cooperative Congress delegates in a parallel session heard about affordable housing and energy. The session started by stating that the world was facing a global climate crisis and we were close to the tipping point. This had already hugely disrupted our society and could in the near future threaten all human life. The seventh cooperative principle of care for our community calls on us to tackle the climate, energy, and housing crisis together.

The built environment is responsible for 40% of greenhouse gases, a large part of which is the residential sector.  A quicker than expected recovery of the world economy following the Covid crisis is now pushing up energy prices just as winter looms in the northern hemisphere. Providing clean renewable energy as part of affordable housing is therefore even more important and each of the speakers outlined how their coops were meeting this challenge.

Dirk Vansintjan the President of RESCoop.eu in Belgium talked about how he co-founded the renewable energy cooperative Ecopower in 1991 which now operates 24 wind turbines, 3 hydropower plants, and 300 solar arrays. He pointed out that the key to the successful shift from fossil fuels to renewables and from centralized to decentralized energy production in housing or other developments is to keep the profits local and ensure that they are invested back in the community.

Sido Kim Hye-min, the Chairperson of Minsnail Housing Co-op, a small housing cooperative in South Korea, explained how they provided affordable housing to young people. She stated how all their properties now incorporate everything from solar panels and car-sharing schemes to bamboo toothbrushes, all initiatives driven by their members. Minsnail has used this to develop a new ‘lifestyle program’ which focuses on progressively reducing a person’s carbon footprint and this had proved very popular among its members.

Guido Schwarzendahl, the Managing Director of a large housing cooperative with over 200 units called Bauverein Halle & Leuna eG in Germany, explained how as a rental coop, three-quarters of its stock is now fully energy efficient. To achieve this they had focussed on making their heating systems as efficient as possible as well as reliable and affordable for their members. This had been achieved using district heating and co-generation which had led to carbon savings of 62% across the estate and had also saved 20% of the cost of providing energy.

Ana Džokić the Founder of Elektropionir Energy Cooperative in Belgrade, Serbia, talked about setting up the first housing cooperative in the country called Moba. The key difference with Moba and other housing companies is that the homes are collectively owned, not privately owned, and it charges 60% of market prices so it is affordable to lower-income groups. The Elektropionir Energy Cooperative, which she also founded, was set up in 2019 and actively encourages citizens to take part in an ‘energy revolution’ by showing that renewable energy can be delivered in a way that is both affordable and cooperative. She hopes to start similar coops in central and southern Europe which is less well served by energy coops than northern Europe.

Thomas Boisvert St Arnaud, a Founding Member and President of Poisson Entêté cooperative in Canada talked about an innovative pilot project he is working on where an indoor farm provides heat and hot water to a housing coop. Although only 16 units, it is the first community net-zero building in Quebec. He outlined the technical challenges involved in setting the project up and how they were overcome using inter-cooperation and the potential for upscaling it in the future.

Sem Oxenaar, who works for REScoop in Belgium on citizen-led and sustainable building renovation, talked about the huge growth in energy communities in Northern Europe, there now are 800 in his home country of the Netherlands where a decade ago there were none. However, there was a real need for more energy communities in central and southern Europe. Citizen-led cooperative energy schemes were not only more energy efficient but also made everyone’s homes more comfortable, group schemes being the way forward as this makes administration, funding, and finding the right contractor much easier.

Aaron Thornell, the Customer and Member Manager for The Ottawa Renewable Energy Co-operative (OREC), one of the largest energy coops in Canada, spoke about cooperative financing for low carbon projects which has been pioneered by OREC. This was started in 2010 and connects individual cooperative members with impactful renewable energy projects in their own communities.